The History of Rotary

The Beginning of Rotary

The world’s first service club was founded on 23 February 1905 when lawyer Paul Harris and three friends met in a small office in downtown Chicago. These men wanted to rekindle in the turn-of-the- century city the spirit of friendliness they had known in their home towns. Word of the club soon spread and others were invited to join. They named their new club Rotary to describe the practice of meeting in rotation at the members various places of business.

Originally formed for fellowship, the first Rotary club quickly evolved to use the talents and resources of its members to serve the community. By the end of 1905, the Rotary Club of Chicago had 30 members. Three years later a second club was established in San Francisco, California, USA. The next year three more clubs were established on the west coast of the United States and a fourth in New York City. Within a few years other groups formed service clubs based on the Rotary model.

The first Rotary convention was held in the Congress Hotel in Chicago in August 1910. The National Association of Rotary Clubs was organised at that time with 16 member clubs. Rotary founder Paul Harris was elected the association’s first president.

Before reaching its 20th birthday, the Rotary association had grown to include some 200 clubs with more than 20,000 members across the globe:

As Rotary grew, so did its scope of activities. During World War I, Rotary discovered new outlets for service — in war relief and peace fund drives at home and in emergency efforts abroad. In 1917, outgoing RI President Arch Klumph proposed the establishment of an endowment fund, which in 1928 became The Rotary Foundation. The Foundation awarded its first humanitarian grant (US$500) in 1930 to the International Society for Crippled Children. After World War II, many clubs that had been disbanded during the conflict were re-established and initiated new service projects, including relief efforts for refugees and prisoners of war.

In the aftermath of World War II, Rotary International sent the largest non-governmental organisation delegation to the United Nations Charter Conference, held in 1945 in San Francisco. Forty-nine Rotarians served as delegates, advisors and consultants to the conference. A Rotary-sponsored conference of education ministers and observers held in London in 1943 was the inspiration for the United Nations Educational, Scientific and Cultural Organisation (UNESCO), established in 1946.

The Rotary Foundation enjoyed modest growth until 1947, when Rotarians made a significant number of contributions in memory of Paul Harris, who died in January 1947. That same year the Foundation launched its first program, Graduate Fellowships (today called Ambassadorial Scholarships), sending 18 students abroad to 7 countries. Today, more than 1,300 students study abroad as Rotary scholars every year.

Two of Rotary’s programmes for young people, Rotaract and Interact, were started during the turbulent 1960s. Interact (for youth ages 14-18) and Rotaract (for young adults ages 18-30) clubs operate under the guidance of a sponsoring Rotary club and give young people opportunities for community service and leadership development, and to promote international peace and understanding. Service to youth remains an important focus of Rotary.

Rotary’s most ambitious undertaking, announced in 1985, is the PolioPlus program — a massive campaign to eradicate polio by the year 2000. Conducted with the co-operation of national governments and intergovernmental agencies such as the World Health Organisation (WHO) and the United Nations Children’s Fund (UNICEF), PolioPlus is a paradigm for public/private sector collaboration in the fight against disease. PolioPlus helps support national and regional polio eradication programs by providing vaccine, surveillance support and social mobilisation. By the year 2005 — the target date for certification of a polio-free world — Rotarian contributions to the global polio eradication effort will reach a half billion US dollars.

Rotary continues to grow internationally. After the collapse of the Iron Curtain, Rotary clubs which had been disbanded during World War II were re-established in central and eastern Europe. In 1990, Rotary clubs were formed in Russia for the first time, and other former Soviet republics soon followed. Kyrgyzstan, once a part of the Soviet Union, is a recent addition.

Today, Rotary International encourages its clubs to focus on a broad spectrum of service activities such as hunger, the environment, violence prevention, illiteracy, drug abuse prevention, polio eradication, youth, the elderly, and AIDS awareness and education. Rotary clubs around the world are united under the motto Service Above Self. 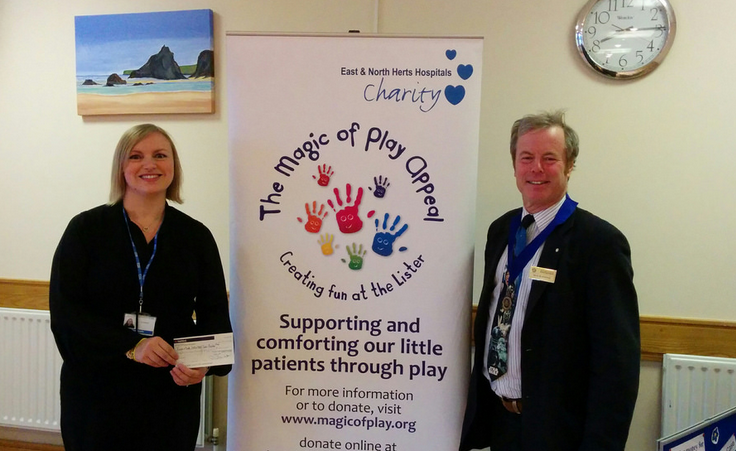 The Magic of Play appeal sponsored by Rotary Club Hertford